Today is 1.1.21 and I’ve already had my mind blown several times by glimpses into both the future and the past. 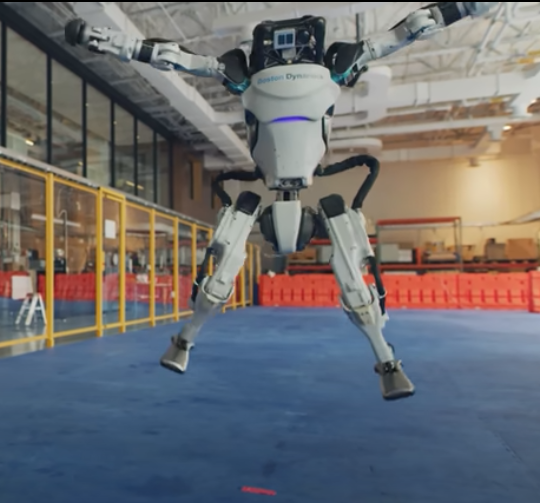 I recently saw a video of the Boston Dynamics robots dancing.
https://www.youtube.com/watch?v=fn3KWM1kuAw

This really blows my mind. I think back to poor little Asimo. He was so slow to think and to move. And life’s little obstacles, like stairs, proved to be huge obstacles for his metal body/prison.
https://youtu.be/VTlV0Y5yAww?t=30

Even at the best of times, poor Asimo seemed to walk with a full diaper.
https://youtu.be/2DMDLrsicZ8?t=23

The BD Dance team isn’t perfectly fluid, but the balancing and the jumping around is so so so much more advanced than where we were a decade ago. The quality of the positional sensors and the speed of calculations going on inside them really blows my mind. The folks at Boston Dynamics have really innovated and put in a ton of  hard work. 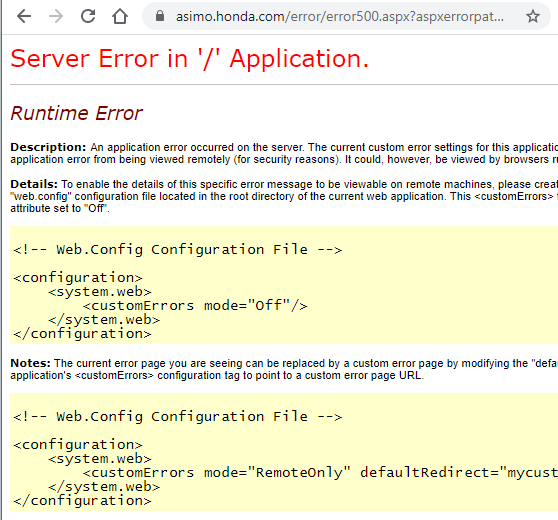 And poor Asimo. In mid 2018 Honda decided to cease all Asimo related work. So I suppose that its fitting that Honda’s Asimo website, https://asimo.honda.com/, is a bundle of broken crap.

Most pages in the site… even a link to The Asimo Facebook page, result in ASPX error pages.

The site isn’t mobile friendly, which means it was probably designed pre-2013. But the last nail in the coffin is that the site uses Flash.

Most will say that Flash has been dead for a long time. For years there’s been a consensus to move past Flash onto better supported technology. But 2021 marks the true death of Flash. Adobe will no longer provide any support or security patches. And the plugin will be “blocked” by Adobe on Jan. 12th 2021.
https://www.adobe.com/products/flashplayer/end-of-life.html

Flash is for reals over now. Which is too bad. Flash was an environment that could run on any machine, any OS, in any browser and deliver amazing and consistent experiences for all users. Most people know Flash as a way of playing games. But Flash also made online video possible. Its sister, Flex, was a powerful interface for programming real software. My bank even had a Flex interface for a while.

Flash delivered on the promise that Java made back in the 90s:  An environment where programmers could create software once that would run on any machine: Windows, Mac, Linux, you name it. It was a truly revolutionary technology that had almost no downside. It ushered in the modern era of the Internet.

Unfortunately, something that was good for software developers, the Internet, and pretty much all of humanity,  couldn’t stand up to the ego of Steve Jobs. Adobe was enjoying more and more success with the PC version of it's creative software… something that had once been an Apple exclusive. For the first time Adobe released a new version of Photoshop (or some other flagship product) on the PC before (or maybe just concurrently with) the Mac version.

Steve was PISSED. How dare Adobe imply that Mac was just A platform and not THE platform??? Narcissist that he was, he lashed out. In April 2010 he posted his “Thoughts on Flash” memo where he attempted to justify never allowing Flash on the iPhone or iPad platforms. Mobile devices like the iPad were very hot. They were the platform that developers wanted to create for. Instantly, the most cross-platform tool for programmers that had ever existed was irrelevant. And as I mentioned, that meant I couldn't use an iPad to check my bank account. It's still hard to believe that the hurt feelings and arrogance of Steve Jobs was allowed to have such a monumental effect. Billions of dollars of software and websites had to be recreated because of a turtle-neck tantrum.

Now, 10 years later, we still don't have a good substitute for Flash. Maybe in another 10 years we’ll be close. But this is all academic. Flash has been in a coma for a long time and couldn’t be used for anything mission-critical for a decade.  2021 is just when Adobe will finally pull the plug.

Amazement of a nerd

When I was a young lad, I saw The Making of The Empire Strikes Back. It mostly covered blowing up model ships as they slid down fishing line in front of a bluescreen and slowly animating tauntaun puppets on a giant table covered in baking soda. My mind was blown. I’ve had an amateur interest in movie making and special effects ever since. I made a few silly videos in high school and even animated some 3D videos for clients. The world of cinema is my path not taken but it still captures my imagination and my desire to create.

I watched some of the "making of" bits for The Mandalorian on Disney plus today. It was interesting. Then they started talking about The Volume. Jon Favreau and the rest of the team talked about The Volume like it was just a mildly interesting new technology at their disposal. Understatement of the year. We know that CGI backgrounds have been added to films and TV shows for years. Some are very complex but these backgrounds are added by a team in post production. It can take days or even months to do. 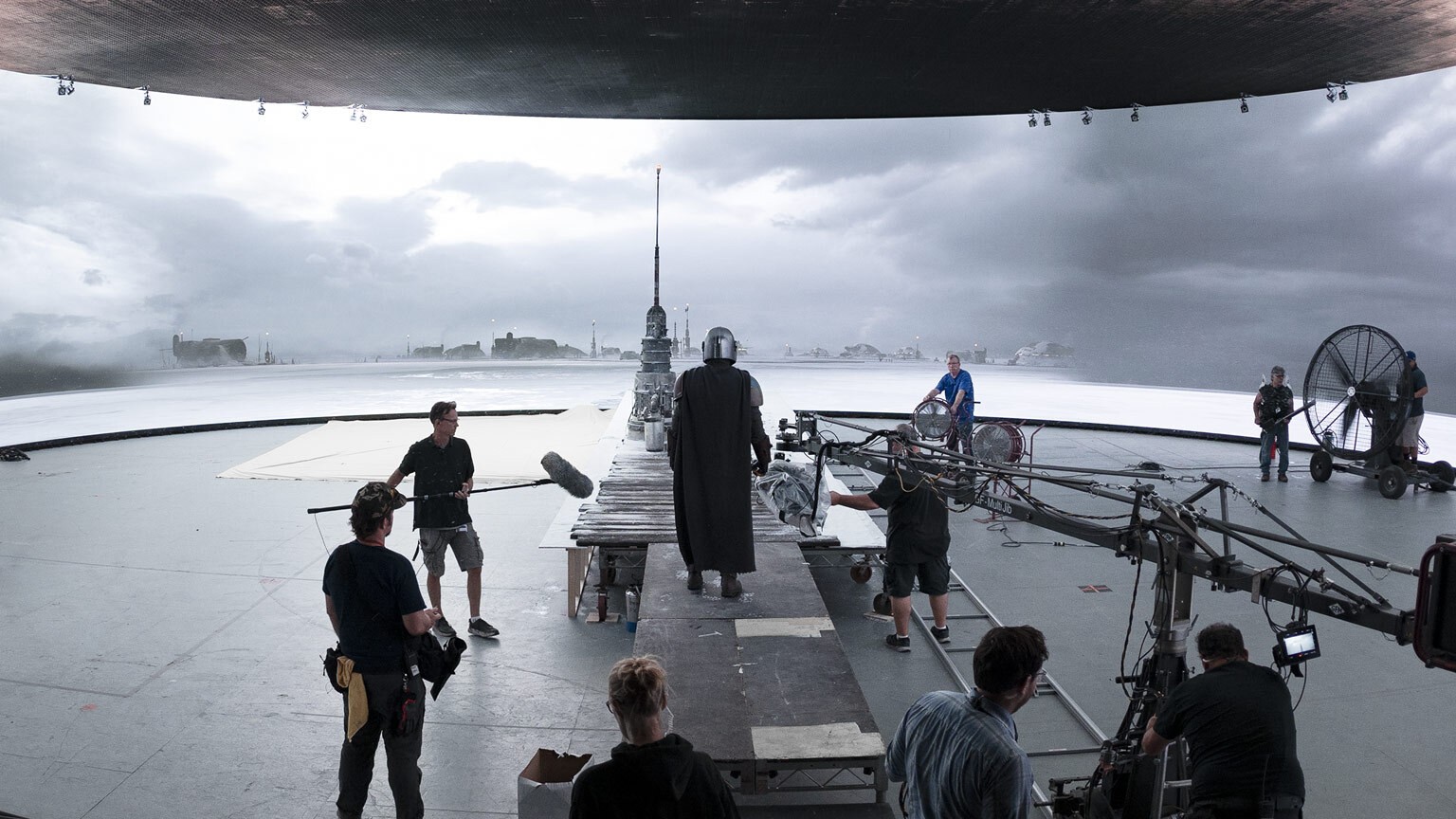 The Volume is the sum of a bank of computers, motion-control cameras, talented 3D artists, and a bazillion LEDs. The result is a 75-foot stage where any possible background or scenery can be added not just in real time but in real space. Tied to the settings and movement of the camera, the giant background screen shifts position and perspective to completely fool the eye. It is absolutely mind bending that the technology to so flawlessly create immersive artificial sets and locations exists.

I know this is old news to some. I’m also probably a year behind the rest of the world in discovering The Volume, but this is the biggest game changer in cinema that has occurred in my lifetime.
https://www.starwars.com/news/the-mandalorian-emmy-awards

2021 is off to a strange but promising start. I wish you happier and healthier days ahead.